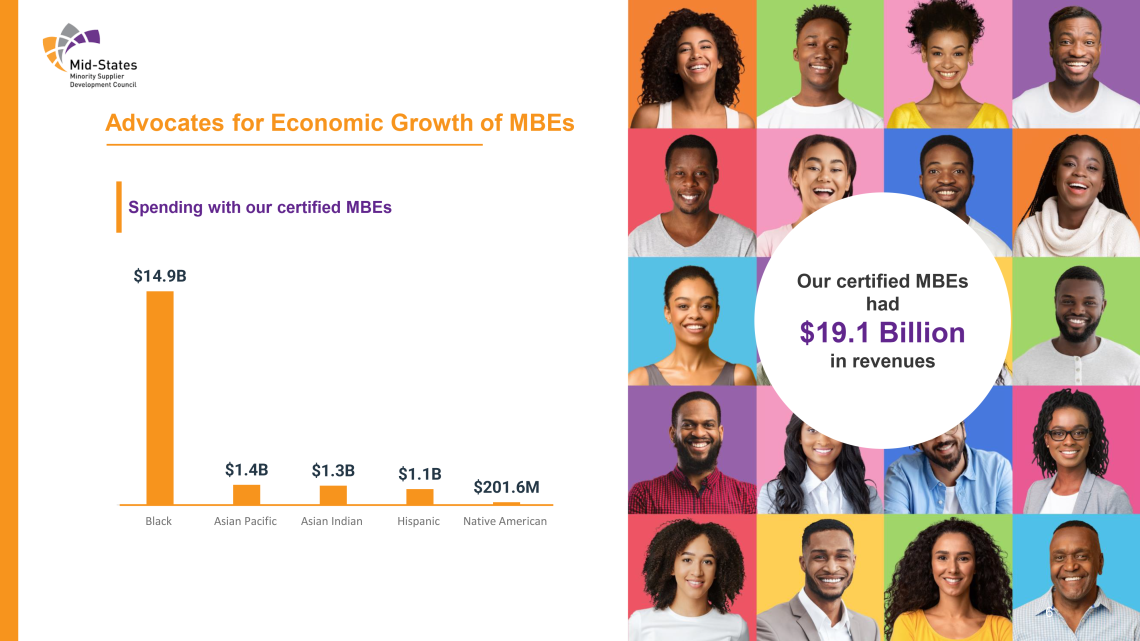 The Mid-States Minority Supplier Development Council (Mid-States MSDC), in partnership with Indiana University (IU) and supplier.io, released its 2021 Economic Impact Study of the organization’s certified MBE community. Despite the shifting economic landscape left in the wake of the pandemic, there has been a $2 billion increase in business activity since the last study was conducted in 2019.

“The data is clear; minority business success has significant, positive effects on the national economy,” Daryle L. Johnson, Mid-States MSDC’s new Interim President, stated. “This report shows that over 63,000 jobs have been created or maintained and our certified MBEs disbursed close to $4.1 billion in salaries, wages, and benefits to about 33,400 employees within our footprint.”

Mid-States MSDC is one regional affiliate of 23 Minority Supplier Development Councils throughout the United States and its territories. Their 2021 Economic Impact Study measured production, wages, jobs, and tax revenues for Mid-States MSDC’s certified Minority Business Enterprises (MBEs) in Central Illinois, Indiana, and Eastern Missouri. The data excludes the Chicago metro area in Illinois and the Northwest Indiana area. These areas are covered by the Chicago MSDC. Missouri data excludes the Western Missouri area. This area is covered by the Mountain Plains MSDC.

“This tri-state regional network has grown to almost 300 certified MBEs that are supported by the organization’s resources and connections to corporations well beyond its borders,” Richard Wise, IU’s Director of Supplier Diversity and Mid-States MSDC board member, explained. “The Mid-States MSDC corporate members’  spend with diverse and small suppliers generates impactful and favorable economic activity in its supply chain and their communities.”

“These numbers tell countless stories of hard work, determination, and grit from people whom Mid-States MSDC walks alongside daily,” Johnson said. “We get to serve as a catalyst for growth in Illinois, Indiana, and Missouri minority business communities.

To be recognized as the Mid-States region’s leading supplier diversity organization, by promoting corporate purchases from minority business.